On this guided day tour of Tombstone, Arizona, explore the “Town Too Tough To Die” and its classic western history like the OK Corral.

Famous for its lawmen and bandits, Tombstone was the metropolitan hub of the American West for its commerce, mining and cattlemen. During your day tour of Tombstone and Southern Arizona, tour wild west history including the San Xavier del Bac Spanish Mission, the famous cemetery at Boot Hill, the Tombstone Courthouse, Big Nose Kate’s Saloon, Birdcage Theater and the OK Corral. This Tombstone Tour departs from the Phoenix/Scottsdale area on Tuesday and Saturday between 6:00am and 7:00am, and returns between 6:00pm and 7:00pm. Departure Location:
Select hotels in the Phoenix, Scottsdale, and Tempe area*
*In efforts to cut down on the amount of time it takes to do pick ups, we may need you to meet at another hotel. Our office will contact you upon booking.

Guests must bring a driver’s license or Passport on the Tombstone day tour as we are traveling close to the US/Mexico border. Our first stop as we head into the wild west is the White Dove of The Desert; one of the Southwest’s best preserved missions at San Xavier del Bac. Founded in 1692, the San Xavier Mission is still in operation and allows guests to marvel at the ornate craftsmanship showcasing both Spanish and Native influences. Original frescoes and statuary are still on display within the mission for guests to admire as well.

We’ll head further south into the “Town to Tough to Die”. Tombstone was home to the true men and women of the West. Outlaws, businessmen, miners, and cattlemen flocked to the area in the late 1870’s for their chance to strike it rich. The most famous lawman of Tombstone, and the entire West, was Wyatt Earp. Wyatt and his brothers originally came to Tombstone as entrepreneurs; however, with the increasing unrest they needed to protect their investment in the mining industry and became lawmen. During the tour, guests will be able to stand on the very ground Wyatt Earp stood during the shootout at the OK Corral!

While in Tombstone, you’ll have a chance to visit both sides of this “colorful” town. The original gathering spots for outlaws and gunmen who strolled into town were Big Nose Kate’s Saloon and the Bird Cage Theatre. The Bird Cage Theatre, which had the reputation as “the wickedest nightspot between Basin Street and the Barbary Coast,” was a saloon, gambling parlor, and theatre show that provided entertainment 24 hours a day, 7 days a week, for 8 years to anyone brave enough to enter. For those men and women who were “overly brave” and fell afoul of the law, they had to make a visit to the Tombstone Courthouse. Included in your tour will be entrance to the museum at the Tombstone Courthouse, which pays homage to the brave souls who did their best to keep the peace in this rough and tumble town. True to the reputation of the Wild West, gunfights and stand-offs were a weekly occurrence. For those souls unfortunate enough to be on the losing end of those gun battles, they were buried at the infamous Boot Hill Cemetery. The cemetery aptly got its name from those who died with their boots on and were buried as such.

Temperatures in Tombstone vary by season. We recommend bringing a jacket in the event of changing weather patterns. 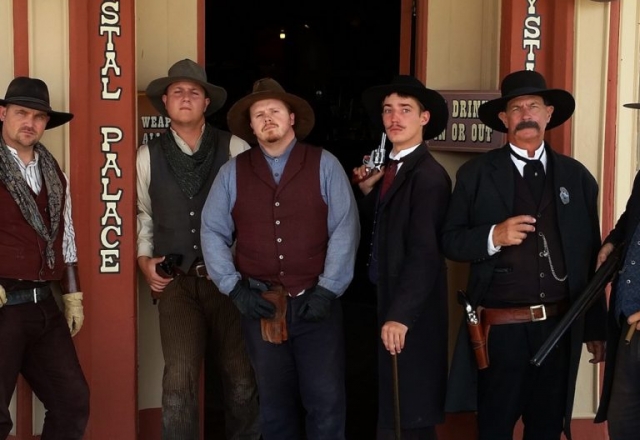 Is there additional costs for admission to attractions in Tombstone?

Yes, many of the attractions in Tombstone have additional entrance fees not included in the cost of the tour.

How do I see the gunfight reenactment?

Tickets can be purchased at O.K. Corral in person on the day of the performance.

Pick up times range from 6am-7am. We will contact you between 4-6pm the evening before the tour to confirm your exact pick up time.

We recommend closed-toed shoes year round. During the winter, we recommend pants and jackets.

Weather appropriate clothing, camera, snacks, government issued ID IS REQUIRED as we will be very close to the border (driver’s license, passport, etc.)

Tour the Apache Trail from Phoenix and experience the wonder of the Superstition Mountain Wilderness, Tortilla Flat, the Goldfield Ghost Town and the scenic Dolly Steamboat Cruise on Canyon Lake.

Embark upon this tour of the Verde Valley, including Jerome and the Verde Canyon Railroad.

2018! From community gardens to olive mills, the Arizona Fresh Foodie Trail® Tour takes you on a guided journey of agritourism through Mesa, Queen Creek and Gilbert.