A favorite of many tour guides, Death Valley is referred to as “Mars on Earth”, with the amazing diversity of this park often underappreciated. Come explore this wonder on a Private Tour of Death Valley National Park from Las Vegas.

Highlights on Your Private Tour of Death Valley National Park: A favorite of many tour guides, Death Valley is referred to as “Mars on Earth”, with the amazing diversity of this park often underappreciated. There is twice the depth of the Grand Canyon between Badwater Basin and Telescope Peak, seen together during your tour of Death Valley. From peaks to salt flats to amazing colors, Death Valley has many faces. Along with the legendary landscape, there is a long and lively human history that brings personality and reality to Death Valley. Early pioneer explorers, Scotty’s Castle and borax mining have inspired many entertaining stories of Man vs. Mother Nature. The basin that Death Valley lies in is quite diverse in that the occasional rainstorm brings with it large patches of wildflowers, and the mountain peaks surrounding the valley are consistently snow-covered each winter.

Today’s guided tour offers approximately four hours in the National Park. A stop at the Badwater salt flats marks the lowest point in the Western Hemisphere, at approximately 280 feet below sea level. The Badwater Salt Flats also boast the hottest recorded temperatures on earth, taken in 1913. A tour to the oldest structure in Death Valley, the Borax Museum at Furnace Creek Ranch, is also highlighted on this trip. Photo stops at Artist Palette and Zabriskie Point badlands, along with views of 20 Mule Team Canyon, and the Funeral and Black Mountain Ranges will round out the tour. On our return to Las Vegas, we journey through Death Valley Junction, home of the Amargosa Opera House and Hotel. Built in 1923-1925, the opera house did not blossom until Marta Becket made it her home and her canvas. As an actress, opera singer, painter, and builder, evidence of Marta’s hard work still exists in this National Historic Building.

We recommend closed-toed shoes year round. During the winter, we recommend layers, long pants, a winter coat, and hats. During spring, summer and fall, we recommend a light jacket and hats. 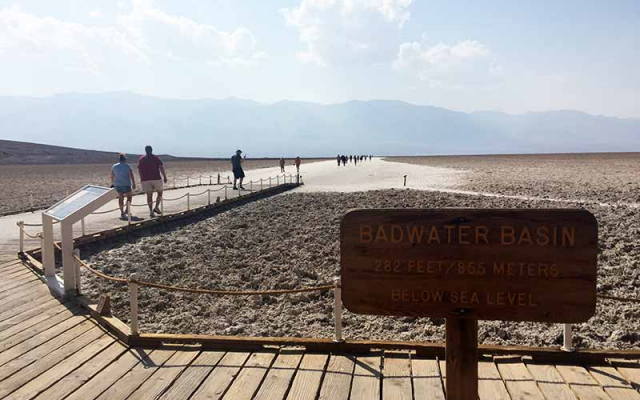 To give you the best experience, pick up times are at approximately 6:00am, but the specific time depends on your pick up location. We will contact you between 4-6pm the evening before the tour to confirm your exact pickup time.

We recommend closed-toed shoes year round. During the winter, we recommend long pants, a light jacket, and hats. During spring, summer and fall, we recommend shorts, light shirts and hats.

How long does it take to get there?

Approximately 2.5 hours from the Las Vegas area. With stops made along the way though, we typically arrive around 9:30am-10am.

With layers of beautifully contrasting sandstone creating an otherworldly feel, Antelope Canyon is easily one of the most enchanting places on the continent.