There’s so much history to experience in the American West but there’s nothing quite like getting spooked at an old western ghost town. Forget the haunted houses and get spooked at these ghost towns for Halloween:

The Apache Trail is an abandoned stagecoach trail used by the Apache Indians that winds through the Superstition Mountains. Just west of Lost Dutchman State Park nestled deep on the Apache Trail is Goldfield Ghost Town, an revival of the 1890s old western town that includes a history museum and gold mining tours. Witness a wild, wild west gun fight and walk down Main Street at Goldfield Ghost Town, the gateway to the Superstition Mountains. Book your ghost town tour.

Just 45 minutes south of the Las Vegas Strip, the Eldorado Canyon hides a mysterious southwestern gem called the Techatticup Mine. This abandoned gold and silver mine is the oldest, richest, and most famous gold mine in Southern Nevada. Once inside the mine, you’ll see the quartz veins that carried the coveted gold and silver – and if you look closely, you might spot the fault line that runs through the mine! Half day tours are available from the Strip.

Tucked into the Black Mountains of Arizona just off Route 66 lies the old western town of Oatman, Arizona. Named after Olive Oatman, a young girl traveling to California who was captured by the Yavapai Indians, the town of Oatman is home to many burros who roam the streets. If you stay the night at the Oatman Hotel on this famous Route 66 stop, watch out for the ghost of William Ray Flour or “Oatie the Ghost,” a miner who died from alcohol poisoning in 1930. The best way to explore Route 66 is on a private tour although ghosts sightings aren’t guaranteed!

Once the fifth largest city in Arizona, Jerome was known for its rich copper mines in the 1920s and is now famous for the supernatural activity reported by many visitors. When you visit “the Largest Ghost Town in America” you might sense you are being followed. Residents tell stories of outlaws, gamblers and miners whose spirits still haunt the town, searching for a way to rest in peace! Haunted tour information.

There are hundreds more ghost towns in the West we didn’t mention. What other ghost towns have you visited? 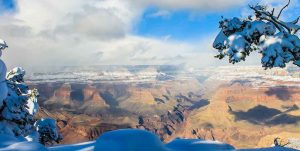